The year was 2003, the country Estonia. Great changes were blowing across this small land perched in the fringes of the north – a vote to join a union of European nations, a blizzard of Western consumerism, a feverish demand for real estate. Bankrolled by Scandinavian moneymen, it promised to draw a sheet over the corpse of the socialist economy and make everything shiny and new.

While Estonia pondered its fate as a new member of the glittering West, I wrestled with my own fate as a husband and father to be, at the age of 23. I had been drawn to northern Europe by its gem-like allure but now had to deal with the permanence of my decisions. I was being pulled apart, tugged back and forth between this land of forest people who were hard to be friend and the needs of my own big Italian-American family. As the days grew crushingly short and the polar night set in, a tense debate between destiny and free will stormed within me.

Was this what I had wanted? 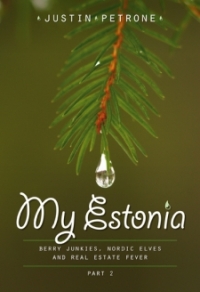